Halfway
This is definitely one to add to the 'get it on a sale list' - Halfway is a solid game with well-designed mechanics and a moderately compelling story that, perhaps lampshaded in its title, seems to run out of new ideas halfway through.  It is however most assuredly worth a look if you like a more tactical sort of RPG.
Written by: Maiyannah Bishop
Halfway
Date published: Aug 10, 2014
2 / 3 stars

Editor's Note: This review was written using a review copy provided free of charge by Robotality.

Halfway is a tactical turn-based shooter developed by Robotality and published by Chucklefish.  It tries to be a stylish and interesting combination of System Shock 2 and XCom and succeeds to a degree but not entirely.  There's fun to be had, but it stumbles about halfway through, unironically.  It's a lot of sizzle but not quite enough steak, to my tastes. 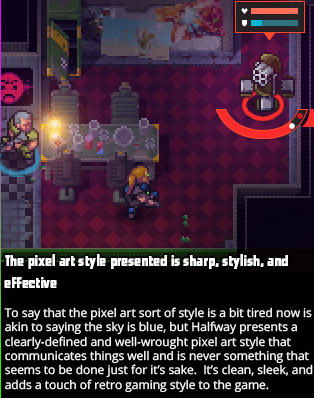 I seem to have fallen into a pattern of commenting on the visuals first, I suppose, but it definetely is the first thing that one notices about Halfway.  It's a bit of an over-used style nowadays, but to me, the pixel art style that Halfway uses is cleanly-presented and it almost is a little reminiscient of the original UFO: Enemy Unknown.  This probably isn't entirely by accident, given the game has a sort of tactical angle to it that is reminiscent of that predecessor.  That's probably a good deal of why it comes to mind.

One thing that deserves some special note is the way the interface is designed: while it could go with a bit of explanation as to how it works - and the prompts I did find I usually get with help text came usually only AFTER I spent time struggling to figure something else - once you figure out the UI, it works very well, designed to be pretty compact, accessible, and it's pretty easy to use.  It just could go with a little more explanation, and some timelier explanation.  The only real problem is something prevalent in many tactical RPGs (Blackguards comes to mind) - it's pretty easy to end up over-extending in movement, and end up unable to attack because you used too many action points moving.  A pretty common problem with tactical RPGs, to be honest, but one that's easily resolved by showing AP costs and indicating the point of no return.  Despite those foibles, however, the interface is quite clean and well-presented, allowing a pretty easy use of most of the important actions and mechanics.

The one thing I was most taken with when it came to the presentation of Halfway, however, was the soundtrack; it's hardly the 'epic' choir-laden soundtracks that have been in vogue for AAA development of late, instead presenting an understated and melodious soundtrack that I found pretty neat.  It's a mix of a sort of science fiction generic theme with something a little more Silent Hill or otherwise horror that suits the game very well.  It's memorable, sounds good, and most importantly, does an exceedingly good job of conveying the feel the game is trying to convey; it's consistent with that theme.

Requiring a certain level of tactics, the combat
provides a carefully-balanced and enjoyable TRPG

I'm just going to go out and say it: I've never been a fan of tactical RPGs.  They tend to be shallow on both the tactics and the story end, trying to do both and being good at neither.  Many games like this get so caught up in the combat that it and the story end up on opposite sides of a massive stone wall, making both impenetrable and causing things to feel forced and gamey.  Not every game has to be about "dat immersion" - but to jettison the roleplaying in a genre called "roleplaying games" seems on it's face quite silly.  There are a rare few games that manage to do both in a reconcilable way, or to make combat worthwhile enough that one doesn't care about that disconnect with the story, but not many games manage to do that.

Halfway, quite frankly, is a game that manages that.  Until it loses steam (more on that a little further on) - Halfway manages a careful pacing of dialogue, exploration, and combat, that feels organic and truly reactive to the overaching story and character development, rather than feeling contrived or artificial.  The game is just deep enough - tactical enough to be accessible but not so simple as to be lacking in skill.

The reason that the original XCOM comes to mind isn't just a certain graphical style similarity - the game features a very similar action point system with shooting and movement being with those action points including things like reactive fire (think the 'overwatch' - but not quite, its fire when fired upon, not when an enemy moves), and hunkering down in cover.  The variation comes from the different unique abilities each of your characters have.  One of the characters, for example, is able to heal herself for an amount.  Yet another is a sniper, ability to take sniper shots at enemies. 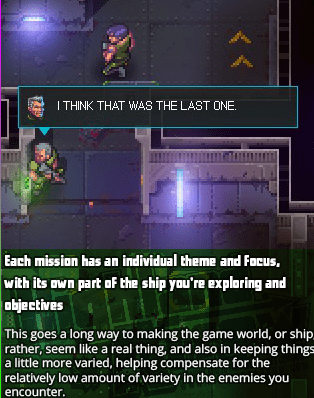 Since each 'mission' has a limit on the number of people you can take, this results in you having to make tactical decision about who to take, and which abilities are of use to you in that mission.  You might think that this would encourage more tactical thinking, but what it actually encourages metagame thinking.  Which is to say: on the first attempt of a new mission, you have no idea what you're going into.  Your loadout will more likely than not be sub-optimal, and later on in the game, you will likely fail the mission.  What this ends up resulting in was me basically repeating the mission, this time making decisions of crew and loadouts that suit the mission ahead.  The problem with that is now I'm not roleplaying the characters or deciding based on what they know, I'm deciding based on what I know, because I have knowledge the characters don't.  It's not a game-breaker, but it is an immersion-breaker.

Moreover, there's a feeling, perhaps ironically halfway through the game, that the game runs out of ideas in terms of enemy variety.  The enemies all start feeling pretty samey, with the difference between the first and second tier of enemies simply being the second is the first, but they have shielding.  Literally, that's it, beyond a change in colour.  It's forgivable, given the fact that we're talking about a lower-priced indie title, but I found myself disappointed by that, because I liked the interactions of the characters if not the story, and it felt like it wasn't going to amount to much.

Each of the missions is essentially bite-size: an admittedly incrementally larger but still small segment of your ship you explore.  The longest one I encountered was maybe an hour through, which isn't the shortest length in the world, but this wasn't because of the size of the section in and of itself, but rather because I was having to deal with a very large amount of enemies and therefore progressing very slowly through that section.

This is a good thing on one hand, because you can basically take Halfway in those bite-sized segments.  You can pick up a mission, finish it in a relatively short amount of time, and come back to it after.  It's a good "lunch break" game for that reason.  It's small and punchy.  On the other hand though, you're probably not getting the best narrative experience out of a game if you're playing like that.  Will you remember the story behind the mission you just did?  How about the one you did last week?  But more importantly, if you wanted the game experience to feel organic, like the timid exploration one does through System Shock 2 or Dead Space, well, you're not going to have that here, unfortunately.  While the actual story pacing is fairly well-done, to its credit, the clear signposting of those missions makes things feel more stilted then they need to.