XCOM: Enemy Within
While the new features added to the engine with Enemy Within are good improvements, and the ability to tone down (albeit not remove entirely) the absolutely maddening tutorial messages, the actual things added to gameplay result in a power creep that makes the game much less difficult, and the difficulty was a lot of the charm of XCOM: Enemy Unknown and the original UFO: Enemy Unknown.  That aside, there's an appreciable amount of good new content here on display worthwhile if you can get past the balance issues the power creep presents.  There's a lot of fun to be had here, but veterans will likely be frustrated by that lack of balance.
Written by: Maiyannah Bishop
XCOM: Enemy Within
Date published: Aug 6, 2014
2 / 3 stars

Editor's Note: This review was written with a copy of the game gifted to Maiyannah by a friend.

XCOM: Enemy Within is an expansion pack masquerading as DLC developed by Firaxis and published by 2K Games for XCOM: Enemy Unknown.  It's not a standalone affair, even though the game has two separate modes/executables - you'll need the original to play Enemy Within, which actually did come as a surprise to some people since Enemy Within didn't come cheap on release, and even today, some good while later, it's still 30 US dollars or your regional equivalent.  So the question becomes: is that non-standalone DLC worth it for that kind of money; the answer is: kind of. 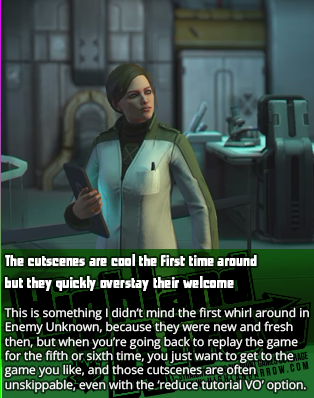 XCOM: Enemy Within is very much something "for fans"

One thing Firaxis did well was responding to the comments and wishes of the community with Enemy Within, making the Progeny DLC optional if you want a more pure experience, adding additional options to the game in general as well as regarding Second Wave, and let me add my voice to the collective sigh of relief that was the option to shut Dr. Vahlen's absolutely mind-numbingly annoying constant babble about not using explosives and keeping aliens alive, etc, because dear goodness was that something that got on the tits of a lot of people, myself included, once you'd played XCOM through once.

The only shame about it is it only goes half-way: one of the things that most dampened my enjoyment of XCOM: Enemy Unknown was how much the voiceovers, various semi-cutscenes, and dialogues would interrupt the game (and it shows how casually I was reviewing at the time I wrote that review that I didn't mention it).  A turn in the tactical combat can be doubled or tripled in length with all kinds of little in-engine cinematics for 'dramatic' shots, aliens being spotted, etc, and it feels like the game is constantly taking control from me to show off things.  'Hey isn't this neat?  Look at this!  LOOK AT IT!'   And honestly while it didn't bother me that much the first couple of times I played through XCOM it certainly has come to grate now that I've played the game several times.  There's been options added to mitigate it, but it seems like a half measure - you can turn it down, but you can't disable it.  So, great, the game wastes less of our time with faff, but it still wastes some of it.  An improvement, but it still doesn't go all the way.

Other than that, the game has had a lot of work put into extending options, fixing stability issues, and in general just polishing stuff.  It's well-appreciated, don't get me wrong, it's just how halfway the options to reduce the

The items added to the formula are neat,
but them being introduced so early unbalances the early game

The new central mechanic to the game is meld, an alien substance I would be worried about spoiling if it wasn't literally introduced in the very first mission of the new Enemy Within game.  This new substance allows you to enhance your operatives with new cybernetic interfaces, allowing them to command robotic suits called MECs, or gene modifications which enhance a variety of the natural abilities of your troopers, offering better aim, health regeneration, and the like.  The two are mutually exclusive, and actually fairly well-designed in the actual bonuses and like, allowing you to choose different bonuses to have different playstyles, but with something like this implemented so soon in the game, it makes it so that you essentially just breeze through the early game if you get MECs or gene-modded troopers off the bat, and there's nothing stopping you from doing so.  This along with the new items you can get from research, such as what is essentially a camoflage grenade, which you also get pretty early, you'll probably have it by the end of month 1 if you go for it, to add to a very appreciable power creep that unbalances the early game.

Mind you, with the addition of new aliens and EXALT, this becomes less of a problem a little later on in the game, but you can get through the whole game right up to the much later missions with the first level MEC tropper, to say nothing of when you get the upgraded suit.  It is quite frankly unbalanced, and while making the early game a little more forgiving was probably the intention, and a good intention at that, they seem to have gone much too far in the opposite direction.

Soldiers themselves have gotten a lot of attention: they now have the possibility of having voiceovers an a variety of their national, native languages, such as spanish or german, and they can be awarded medals for conduct on the field that confer them bonuses.  These medals are gained when certain events happen during tactical missions, so their bonuses are balanced by a relative rarity, and it also helps flesh out the little custom histories that many players no doubt end up attaching to their custom characters - no doubt directly prior to their untimely demise.

The thing with EXALT is they have so much potential to be some sort of counter foil to XCOM that never gets realised.  While I respect and understand that a shadowy organisation loses it's mystery when the secret is revealed, it goes beyond simply not unraveling their backstory: they never feel like more than an annoyance.  You never feel that you're going to get put under if you don't deal with them, or even that EXALT poses an appreciable threat to your operations.  You are introduced to a mechanic whereby you send operatives to try to pin down cells, and as long as you do the missions to retrieve these operatives in what is the games most blatant example of mindless repetition I can think of - there's literally two different mission types I ever encountered, one was holding a point, the other was simply interacting with it, both just involved mowing down a bunch of ill-equipped and unarmoured humans.  The most I've ever seen EXALT with is laser weapons (when Im well into plasma and MEC troops and the like) - so they felt like they may as well have been harassing my troops with cast stones and harsh language.  They don't feel like a threat, to me.  They feel like an annoyance.

The base assault on EXALT's headquarters is where EXALT shines, that one glimmer.  You have this opulent sort of subversion of XCOM's own base, but suggesting an almost occult, old-world and corrupt almost speakeasy gangster-style version thereof.  The visual design is striking, and the enemies' quantity here almost has them as more a rush of lesser-equipped but numerous foes.  It's actually kind of tense when you dig into the furboulgh that the firefight becomes, and it makes me sad that the other missions felt like so much filler.  It feels like they designed that endgame scenario, and then had to come up with other missions to make that final headquarters mission in that arc seem significant, and kind of half-assed it, honestly.  It's unfortunate: there's a lot of untapped potential there. 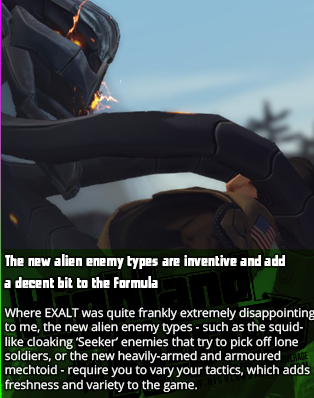 The new alien enemies and tweaks to the existing,
on the other hand, are well-thought-out

The game has a couple of new aliens added and a variety of tweaks to the existing enemies as well.  Enemies which don't make use of cover - the new mechtoid, as well as the cyberdisc and the sectopod - will now just enter overwatch rather than trying to get into cover that won't protect them.  Sectopods have a buff that absorbs a certain amount of damage, making them much more the fearsome tank type of enemy they were in the original UFO: Enemy Unknown.  There's a whole slew of little tweaks like that which no doubt were meant to make the end game more difficult to compensate for the new additions of the research and Meld stuff.  They don't quite accomplish that aim, but they are welcome nonetheless.

The first new alien enemy is the 'Seeker', (pictured in the boxout to the right) a squid like hovering enemy that has a cloaking system that it will utilize until its in melee range of one of your squadmates, which they will then 'strangle', incapacitating them and doing a small amount of damage, until either the Seeker is killed by another of that soldier's squadmates, or the Seeker kills the soldier.  It punishes players that are having single soldiers running off ahead, or leaving snipers far behind the main line using squadsight, alone and undefended.  You therefore have to be smarter about moving as a fighting unit, and that's a pretty good thing for the most part.  The unbalanced nature of the MEC troopers puts a dampner here as well though, as the MEC trooper cannot be strangled by these cybernetic monstrosities.

That problem gets it's own answer: the mechtoid, a sectoid trooper outfitted with a MEC suit much like the human soldier's own MECs.  It seems to be the first instance in the XCOM game of the aliens imitating the human's progress with a version of their own, but the mechtoid is much more heavily armed than it';s human counterpart, with two plasma weapons mounted.  It will also usually be accompanied by a foot sectoid trooper which can buff it with additional health on top of its already large amount of health.  it's big, its stompy, and it is an effective counter to the MEC.  The problem is in all but the highest difficulty, it will come much later than you get the MEC, so there is that period where you basically have a universal trump card.